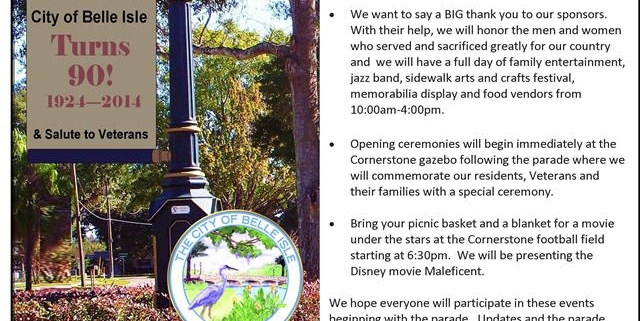 Belle Isle Turns 90 in 2014 and will be celebrating its 90th Anniversary in the Fall of 2014. Plans are now underway to make it a spectacular and exciting year for the entire community.

Once a Native American oasis, Belle Isle was founded in 1924 to protect Lake Conway and its chain of lakes. Town supporters resisted Orange County’s plan to use the lakes for drainage by forming their own municipality.

In 1928, Belle Isle was annexed back into Orange County and records of the City of Belle Isle ceased to exist. However, residents rallied against another attempt by the County to use the lakes in 1954, and the local government was reinstated. Florida later recognized the City of Belle Isle’s charter in 1975. In the same year, City Hall was named “Dexter Hall” to recognize Mayor Ross Dexter, the first mayor to pass away while in office. Government ran continuously until the early 2000s when a council-manager form of government was ad¬opted to better serve Belle Isle residents. Since that time, the city has flourished. The establishment of a Belle Isle Police Department and an agreement to open Cornerstone Charter Academy mark Belle Isle’s largest achievements in recent years.

Want to join the discussion?
Feel free to contribute!

How long does each roofing material last in Central Florida Climates?